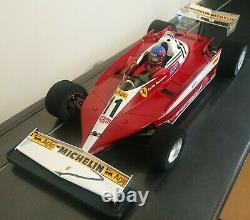 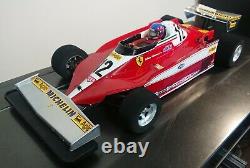 It's newly built, I've just finished it, but have never run it. This was originally released by Tamiya in 1979. It was re-released just recently but soon discontinued: It had a very limited run. I was amazed to find a place that still had one left! This might even be the last new one in the UK!

You'll just need a transmitter, receiver and battery to be able to run it. So what's going on here? Why newly-built but never run?

I just like building them and making them look immaculate. I wouldn't dare run it - it might get scratched, cracked or scuffed, ha ha! Having got it looking this good, I couldn't bear to run it, so now someone else can have the fun of playing with it! Unusually, Tamiya have supplied two body shells with this model. One made of ABS (Opaque: Non-see through).

Being see-through originally, it is painted on the inside which gives a fantastic gloss finish but more to the point, also protects the paint from scratches. Please note that with the ABS body, the front wing is separate from the body and attached to the front bumper with two screws. That needs to be removed when you want to run the p. Body the front wing is moulded into the body and rests on the bumper, so it won't fit if the other front wing is still attached.

I hope you can see what I mean from the pictures, but if not, you'll see when you receive the car and also if you look at the instructions. Picture 3 has the ABS shell on the chassis and picture 4 has the polycarbonate shell on the chassis. The numbers can help you work out which-is-which. They only give you one driver's head!

However, the head unscrews so you can switch it between shells! They give you two sets of decals according to which driver you want, so I did one of each, however the head is in Villeneuve colours. Please note these are NOT stock pictures: The pictures are of the actual item you'll receive. Is a Tamiya TBLE-02 S. It's an ESC for brushless motors but can also do brushed and is set in brushed mode at the moment, so you're good to go with the supplied brushed motor.

However, if you want to fit a brushless motor, you can run it with this ESC too. That's why in the pictures, the orange wire is stowed and not connected: That's just for brushless motors.

You'll need to calibrate this ESC with your transmitter though, so I'll send you the instructions for the ESC. Servo : The steering servo is a Futaba S3001 ballraced servo and more than up to the task. What's more, it's already centred! I have a gadget for centering servos, so when you connect your receiver, you won't even have to re-adjust it! Because the instructions told me to cut off the mounting lugs, so I had to sand those down for neatness.

Receiver: The receiver is intended to sit on the tray on the right of the car opposite the ESC. It's held on by double-sided tape: That's the white bit you can see. The tape is there all ready and waiting for you, just peel the top off and stick your receiver on! There's also already a hole in the body for the receiver aerial.

Please note both the ESC and the receiver sit on trays that rotate and swivel: They're not loose, they're meant to be like that: It's so you can swivel them out of the way to get the battery in. Bearings: It's upgraded to proper metal ballraced bearings throughout the model, so that means both gearbox and wheels.

I wouldn't put those appalling plastic ones in that Tamiya provide as standard! They don't even rotate!

They're a friction item! PROPER bearings in this one! Chassis: It's the Tamiya F104W chassis is intended for on-road running: Please don't run this over bumps and jumps or you'll spoil it. It's really intended for running on smooth race tracks. Although I have never driven this car, I have put electricity through the motor to check that everything is working OK and there is drive to the rear wheels.

Everything IS working OK and there IS drive to the rear wheels: Forward, reverse and differential both left and right are all fine and I have a video of this test. The costs of this build were.

Servo - I'll let you have that for free, as I've got a few of them amongst all my spares. If you get the car for that, I've essentially built it for you for free, but that's fine. So I think that's about it. I hope someone has lots of fun with this. I'd love it if whoever wins this could send me a short video clip of it running if possible? If you'd prefer to collect it rather than have it posted, we're in Nottingham NG4. Below I'll paste in the "official" Tamiya blurb about it.

The sleek and powerful Ferrari 312T3 made its racing debut in the 1978 South African Grand Prix. Underneath it's aerodynamically polished, wide body lay a 3-liter horizontally installed 12 cylinder engine with 510 horsepower of output.

With drivers Carlos Reutemann and Gilles Villeneuve at the wheel, the Ferrari 312T3 took a total of 4 victories for the Grand Prix season and took second place in the 1978 Constructors Cup. Chassis employs FRP half double-deck F103 chassis.